DESCCOWATER completed a new Wastewater treatment plant Design and Installation at the Village of Refton.

The Village of Refton is located in Strasburg Township, Lancaster County, PA. Refton is an older community served by on lot disposal systems (OLDS), many of which were in a failed or potentially failed state with insufficient room for replacement systems.

Because of the small lot sizes within the village and the age of the OLDSs, the PA DEP encouraged Strasburg Township to provide public sewers and treatment for the village. A total of 101 edus were identified during the Act 537 revision process completed by HRG Engineering in calendar year 2012 and submitted in January 2013.

About The Village of Refton 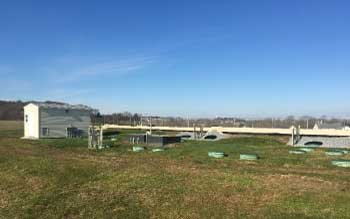 The village consists of mainly residential homes with one church, one fire company and a few small commercial entities.

A low pressure collection system was proposed for the village with treatment to tertiary levels by a recirculating sand filter (RSF) followed in series by a subsurface flow constructed wetland to accomplish denitrification and final disposal to a shallow placement at-grade disposal bed.

Project Manager, Ryan Conrad, immediately had larger excavators delivered to the site in order to break through the rock. The crew was able to maintain the project schedule and keep excavation moving forward despite the rocky terrain.

A small sinkhole was discovered after a large rain event while DESCCOWATER’s crew was backfilling after the tanks had been set. 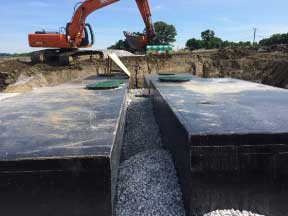 Quick action was taken to mobilize a geotechnical engineer, vacuum excavator, concrete pump truck, and additional labor. With DESCCOWATER’s fast action, the sinkhole was eliminated and there was no damage to any of the tanks.

DESCCOWATER proudly employs project managers, foreman and crew with years of experience. They keep jobs running smoothly and efficiently even when unexpected circumstances, like the ones on this project, arise.